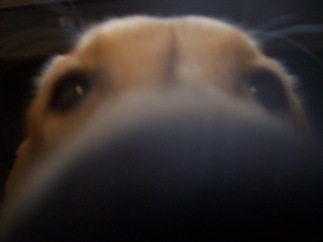 It’s cold and rainy today which mirrors my mood. It has become evident that this week is likely the last we will share with our Golden boy Akers. He is #16 of our Seeing Eye puppies and named in honor of Philadelphia Eagles kicker, David Akers. Like his namesake, Akers was full of personality, always on the lookout for fun, and full of mischief.

Although you would have to go back three generations to find a Golden Retriever in his lineage, he is the most Golden-like Lab we have raised. Starting as a puppy with fluffy, golden fur, the Mohawk on his snout gave him a comical look. It was a harbinger of things to come. He never overtly misbehaved. But his covert ops are legendary. We never did figure out how he got Nate’s brand new glasses from his headboard while on the bed tiedown, but he did and destroyed them. He chewed holes in my hardwood floors – while being supervised. Every time I would look his direction because something didn’t sound right, he would look up at me innocently with a bone between his front paws. Later when he would move, there would be a hole in the floor.

Akers loves kids. As a Seeing Eye puppy, his favorite thing to do was a school talk, which always ended with him encircled by kids petting and playing with him. He dressed up as a lion for Halloween and would stand at the door, looking out the side windows all night waiting for kids to come. And he loves our grandkids, always excitedly wagging when they come. But his absolute favorite activity is swimming, actually I think he prefers jumping in more than swimming. I don’t know what I look like when I swim, but Akers always thought that I needed rescuing and would jump in after me. He wanted to continually get out and jump in again, so we taught him to use the ladder to keep the liner from getting ripped. Nothing made him happier than being at our camp in Maine. He could spend his whole day jumping in the lake, rescuing swimmers, no matter how far from our dock they were, and eating nature–anything he could grab as he ran past. It was heaven for him.

We said goodbye to Akers once before when he returned to The Seeing Eye for his formal training. (For those who say they couldn’t raise a puppy to give to someone else, this goodbye is infinitely more difficult. They really aren’t comparable.) He made us proud when he went to work in New York City. Even as a guide, he was still a clown. His instructor told me that he had to visit NYC to do a check on Aker’s work. He was not taking his blind person to the right house after work. She lived in a row home in Brooklyn. He would go up the wrong walk, but when the instructor watched him, he realized Akers was doing it on purpose to be funny. His tail would start wagging as he started up the wrong walk, and he’d get very excited at the door as his person figured out it wasn’t her house. Then he would immediately turn around and take her to the right door. He knew which house was theirs; he was just messing with her because it was fun. That was Akers. Unfortunately for him, he had to take early retirement due to the failing health of his blind person. But that was our gain. We were able to welcome him back to our family.

It took him about eight months to get the hang of retirement. He couldn’t understand why he wasn’t going everywhere with us, why no one was putting a harness on him, why he wasn’t needed. But his work didn’t really stop – he helped train seven more Seeing Eye puppies. He became my shadow and sometimes I wasn’t sure if he was trying to kill me or play when he’d lie down behind me, and I would end up on the floor next to him. He is still smiling and giving a wag of his tail when I greet him, but he is starting to look uncomfortable. So it is time, but this is going to be a hard goodbye.